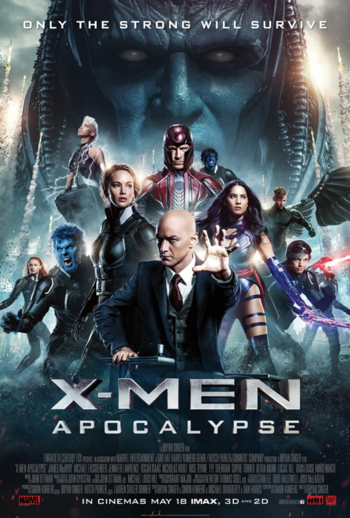 "I think the world still needs the X-Men."
"Everything they've built will fall! And from the ashes of their world, we'll build a better one!"
— En Sabah Nur / Apocalypse
Advertisement:

X-Men: Apocalypse is the 2016 sequel/prequel to X-Men: Days of Future Past and the ninth installment in Fox's X-Men Film Series, directed by Bryan Singer.

The movie is set in 1983. Professor X has successfully reopened his school with Beast's help, Magneto attempts to live an ordinary life in Poland by founding a family and Mystique continues her mission to rescue mutants who are in peril. Meanwhile, an ancient and very powerful mutant known as Apocalypse rises, and he's leading his Four Horsemen through a rampage to bring about his namesake.

The film takes some inspiration from the X-Factor side of the crossover Fall of The Mutants.

The film was followed by a 2019 sequel, Dark Phoenix.

Not to be confused with X-Men: Mutant Apocalypse.

open/close all folders
Tropes # to C
Tropes D to F
Tropes G to L
Advertisement:
Tropes M to O
Tropes P to S
Tropes T to Z
"Whatever lessons you learned in school, whatever your parents taught you... you're not kids anymore. You're not students. You're X-Men."
Feedback

Quicksilver's bullet time returns in epic fashion, as he uses it to evacuate the entirety of the X-Mansion, to the tune of Sweet Dreams.

Quicksilver's bullet time returns in epic fashion, as he uses it to evacuate the entirety of the X-Mansion, to the tune of Sweet Dreams.