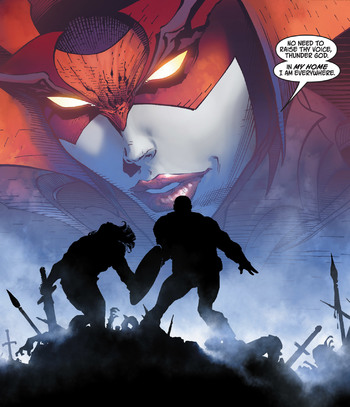 Yes, even in that place
Nita: You're here too?
Transcendent Pig: The problem with being transcendent is that people keep asking you that.
— Young Wizards
Advertisement:

Under normal space-time rules, people exist in only one place at one time. They can cheat with remote bodies, clone bodies, mind copies, and so on, but physically one body can only occupy one place.

For whatever reason—inherent trait, aborted ascension, whatever, these people can exist wherever and whenever they please. Often results in many, many instances of Offscreen Teleportation, except they didn't teleport; you just noticed that they were somewhere else. Unrelated to The Cat Came Back, which is for characters who simply have the mundane talent to follow someone to any place.

See also The Omnipotent and The Omniscient. Every form of Powers That Be is also technically one of these, this trope is for examples that are outright stated to be present literally everywhere. Has no relation to Omnipresent Tropes.