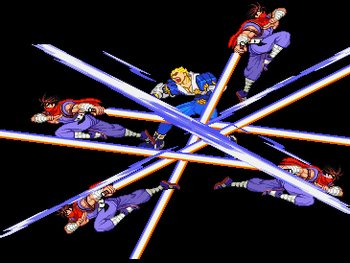 This is a flashy move that involves slashing a helpless enemy from different angles at a rapid pace. It usually involves reappearing in another position immediately after performing a strike to follow up with another attack (usually making the enemy go upwards while the performer strikes in a rising diagonal slash that zigzags upwards), or have dopplegangers attack with you. Sometimes both are used. If two or more fighters are in sync, it can even be a Combination Attack. The main idea is that it's a very fast attack that involves multiple strikes coming from multiple sides. At the peak of the attack, a downward blow is used like a vertical cut, or sometimes a throw, often found along with a Spinning Pile Driver movement.

A move that could be mistaken for be a Ninja move only, it's in general used by a Fragile Speedster that mastered a sword or maybe two. In fighting games, it's usually used as a Special Attack or Meteor Move to quickly end an opponent.