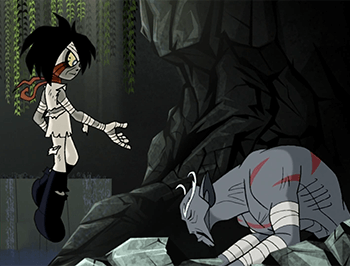 The heroes have struggled long and hard, but they have finally foiled the Evil Plan and beaten everything that the Big Bad can throw at them. They have clearly defeated him; the good guys have won. The villain, rather than trying to escape, freaking out, or attempting to take the heroes with him, graciously acknowledges the heroes' victory and yields, surrendering himself to their justice.

This is not a trick to catch the heroes off-guard; the villain really is choosing to lay down his sword and give up. He may, of course, return to fight the heroes, but that is definitely another day — which the villain might point out by saying "We Will Meet Again." Might occur in the case of an Affably Evil or Harmless Villain, or a Magnificent Bastard. Perhaps the villain is sufficiently well-intentioned or rational to quit fighting when he is at the end of his rope and his goals are now out of reach. Perhaps he's a Noble Demon who respects the heroes' strength, and upon seeing that he can no longer win, yields to them to retain his honor. Most likely seen if there is a lack of hatred between the villain and the heroes, and especially if there is a sort of camaraderie between them, or both were trying to do the right thing; in this case the villain was simply misguided. Needless to say, the Worthy Opponent is almost guaranteed to do this. It might even cause him to join the hero's side.

Can happen more often in series where there is a Cardboard Prison involved. A villain who happens to Know When to Fold 'Em just may do this. Can also happen when he chooses to Face Death with Dignity. The default hat of anyone training at a Pacifist Dojo.

Subtropes include Villain's Dying Grace and Touché, which the villain is likely to say.

Given that this trope involves losing what is quite often a climactic battle, beware of spoilers.

Amber then proceeds to walk away from her mother, then strike a conversation and dance with a black dancer, which is pretty ironic considering her mother was racist. In the stage show, both Von Tussles actually become this. After some sulking, they have a verse in that song where they finally just accept it and basically just go with the flow

Upon defeat, Nightshade admits he couldn't allude capture forever, and shall endure the capture sequence with dignity.

Upon defeat, Nightshade admits he couldn't allude capture forever, and shall endure the capture sequence with dignity.