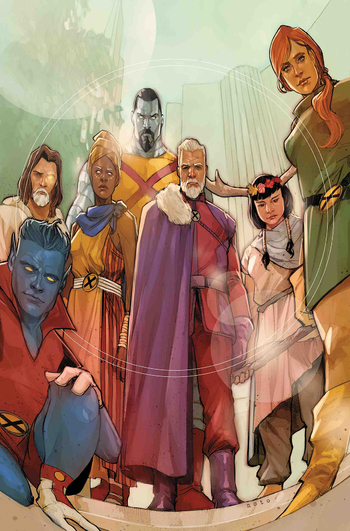 But where's the Apocalypse?note From left to right: Nightcrawler, X-Man, Storm, Colossus, Magneto, Nature Girl, and Jean Grey.
Age of X-Man is a 2019 Bat Family crossover event spinning out of the X-Men Disassembled storyline in Uncanny X-Men. The event is spearheaded by Zac Thompson and Lonnie Nadler, who previously worked on Cable and wrote the Apocalypse back-up stories in X-Men: Black.
Advertisement:

Nate Grey, the son of Scott Summers and Jean Grey hailing from the Age of Apocalypse, has returned. He has managed to warp the world into the antithesis of his home dimension, a world where mutants are treated like celebrities and the world is in a state of peace and acceptance... at least on the surface.

The event has a similar structure to the aforementioned Age of Apocalypse, launching from an Alpha issue before several miniseries tell its story and explore its world. Notably, the other X-ongoings, such as Mr. and Mrs. X, X-Force (2018) and even Uncanny X-Men itself, will not be interrupted to make way for the storyline.

The comics involved in the story are:

The event can be considered a Spiritual Successor to both Age of Apocalypse and House of M.

In addition to the usual X-Men tropes, this story provides examples of: