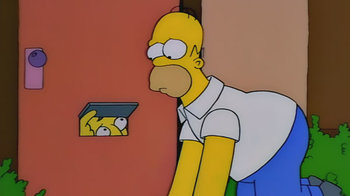 Bart and Homer are forced to work as carnies after Bart crashes the Mercedes convertible said to belong to Adolf Hitler, and befriend a father-son carny duo named Spud and Cooder, but when Homer brings Spud and Cooder to their home, it's the Simpsons that end up getting kicked out of it.