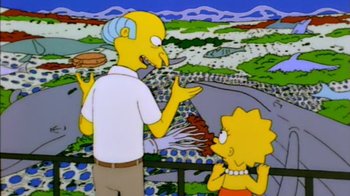 "I call it the "Burns Omni-Net.' It sweeps the sea clean."
Advertisement:

While Lisa champions a recycling program, Mr. Burns discovers that he's lost his fortune (and was never told this before because his accountants are sycophants/afraid of Mr. Burns' wrath) and now must live like a common man. With Lisa's help, Mr. Burns devises a plan to regain his fortune.