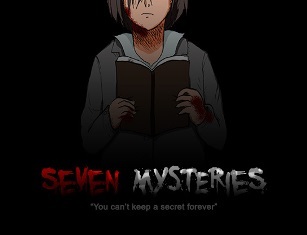 Seven Mysteries is a Vietnamese freeware horror puzzle game made by sanggameboy in RPG Maker VX Ace. Late at night, several students in a cursed school encounter a string of supernatural events. One student, Tuan, goes on a supposedly fun treasure hunt, only to discover a notebook, which holds a dangerous secret. It involves mysterious accidents, disappearances, and murders involving transferred students over the course of a year, apparently because of a certain curse. What is it and how does it connect to the "curse" on the school?

There are 5 different endings for you to explore: the True Ending, Happy Ending and 3 Bad Endings. Different requirements have to be met and actions taken to achieve all of the endings. It is difficult to mention tropes without spoiling the twist in the True Ending, so be warned before reading beyond this point.

There's an official 2017 remake of the game, called "Seven Mysteries: The Last Page". The characters are more fleshed out and its given a better explanation about the school and the curse.