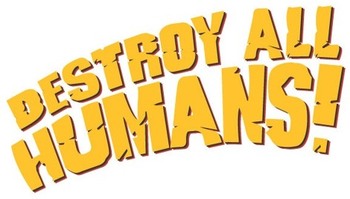 Destroy All Humans! is a Wide-Open Sandbox Action-Adventure video game franchise that began in 2005 by Pandemic Studios.

Taking place in a satirical version of America in The '50s, Destroy All Humans! follows a sarcastic, trigger-happy "grey" alien named Cryptosporidium-137 (or just "Crypto" for short). Crypto's species, the Furons, have been rendered sterile through centuries of nuclear warfare, and are dependent on cloning to reproduce. To keep their genetic code from becoming too corrupted, the Furons must steal DNA from human brainstems — apparently, Furon sailors on furlough left some untainted genes in the human pool back when the species still had genitals. Unfortunately, it seems Crypto's predecessor, Cryptosporidium-136, has been captured by The Government. Crypto's mission is to harvest human brains, find out what happened to the last Crypto, and generally cause mayhem. Along the way, Crypto confronts paranoia, mad science, the military, a government conspiracy, and exploding cows. Also notable for being pitched by Matt Harding. Yes, as in "Where the hell is Matt?" Harding.note This game was more or less directly responsible for that, in fact — he pitched the exact opposite of the game he actually wanted to make, then quit when Pandemic took the pitch seriously.

It was followed up by a sequel, Destroy All Humans! 2, taking place in an exaggerated version of The '60s, and a pair of sequels set in The '70s: Big Willy Unleashed on the Wii in 2008, and Path of the Furon on the Xbox 360 and PlayStation 3 in 2009. Around 2006, it was pitched to Fox for a potential television show, but it was not to be.

that a remake was in the works, developed by Black Forest Games and published by THQ Nordic. It was released on July 28th on PC via Steam, Epic Games, and GOG.com, as well as having Google Stadia, PS4 and Xbox One ports. The remake also includes a previously unused lost mission from the game's Area 42. Pre-Ordering got you free access to some cosmetic Skins for Crypto, while a later update added Christmas skins on December 17th, 2020.

A free demo of Destroy All Humans! (2020) that contains the first mission and Turnipseed Farm was put up on GOG on May 27th, 2020,

for the remake was uploaded. At the very end however, Crypto-138 appears asking if 137 is "done yet", before being told to "wait his turn". The remake of 2, Destroy All Humans! 2: Reprobed was later revealed

, and the trailer was released on September 17th, 2021 during THQ Nordic's livestream.

Not to be confused with the Kill All Humans trope, though in case the name didn't tip you off, the game series definitely qualifies for it.

Crypto has just conquered a single TV Tropes page. After the credits roll, the rest of the website comes into view, with The End? appearing as ominous, eerie theremin-laced music plays.
Feedback

At the end of the first Destroy All Humans! game, Crypto takes the place of the President and uses the Red Scare to industrialize their brain-harvesting procedure.

Example of:
Our Presidents Are Different

At the end of the first Destroy All Humans! game, Crypto takes the place of the President and uses the Red Scare to industrialize their brain-harvesting procedure.