The main characters of Destroy All Humans!. 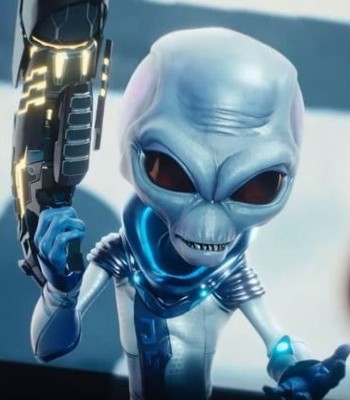 "This planet is now a territory of the Furon Empire, and your asses belong to me!"

The protagonist of the Destroy All Humans! series. Crypto is a member of a race of aliens called the Furons, who all clone themselves due to their race's lack of genitalia, Crypto himself having been cloned at least 139 times in-lore. He is on a mission to invade and conquer Earth to harvest human brainstems, which contain Pure Furon DNA, in order to save his race from extinction due to Clone Degeneration, but this also won't stop him from having fun as he goes, either through wanton destruction or debauchery. 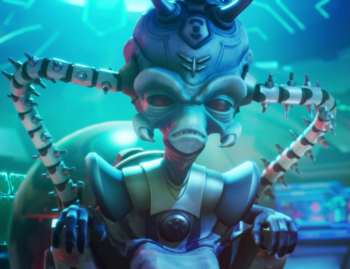 "Let's just say I'm glad I'm up here, and you're down there. Loathsome little planet..."

Orthopox, otherwise called Pox, is a high-ranking fleet commander of the Furon Empire and later the new Furon Emperor. The deuteragonist of the series, he normally appears as a holographic projection upon a floating communication device, which becomes his indefinite avatar after the Furon Mothership is destroyed by a Russian nuclear missile. He acts as a scientist and Crypto's superior officer, giving him missions and advice on certain tasks to fulfill. 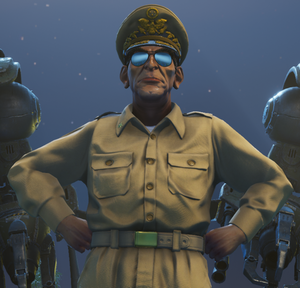 "Tanks!! Pull in the tanks!! Show'em some American steel!"
The central representative of the US Army in the governmental branches and the leader of the counterattack against the Furon invasion. Delegated to being Silhouette's subordinate, he resents the appropriation of the Military into a single chain of command under the American government, but has no choice except to comply.
President Huffman/Roboprez 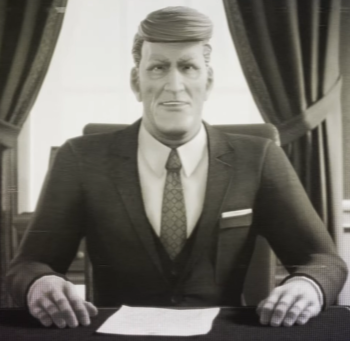 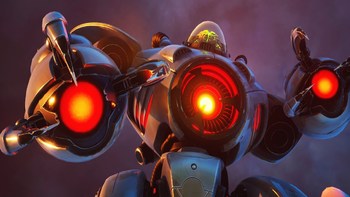 Roboprez
"If... elected... I promise... to... DESTROY... ALL... FURONS!"
President of the United States of America. He's assassinated by Crypto late in the game, only for his brain to return piloting a gigantic mecha called "Roboprez", invented by Silhouette as a weapon against Crypto.
Silhouette 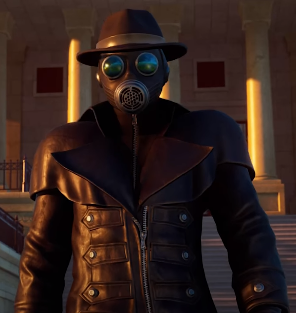 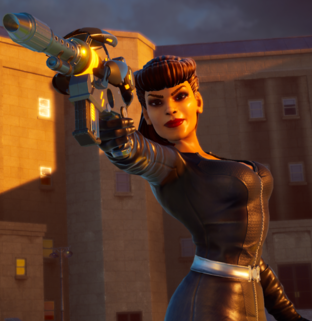 Out of disguise.
"If you had to put up with politicians playing grabass all day long, you'd wear a mask too."
The enigmatic head of Majestic-12, often seen wearing a gas mask and a black trench coat/hat combo, as well as a voice modulator device to hide her real voice. Yes, her voice, since the leader of Majestic is actually a woman, with her OWN plans for world domination.

"Sacred Son of Arkvoodle! By the holy book of Pudenda, it pleases me to see thee back in action! Thou knowest the drill, boy."
Arkvoodle of the Sacred Crotch, a Furon god held in high regard in Crypto's homeworld. Effigies of his likeness were hidden on Earth over a millennia ago, containing landing beacons for Furon spaceships. By completing small requests given by Arkvoodle, Crypto can unlock new landing zones for his saucer in each different location.

In DAH!2, Crypto is revealed to be the Chosen One of a prophecy that heralds the second coming of Arkvoodle, thus starting the Cult of Arkvoodle sidequests in which he assembles a mass gathering of humans to appease the Furon god and give himself a new weapon in the process.

"GO GO GASTRO!"
The janitor and cook aboard the Mothership. When it was destroyed, Gastro's consciousness was saved to a Holopox unit much like Pox himself. However, rather than acting as mission control, Gastro's Holopox unit has been outfitted with heavy weaponry that he uses with extreme prejudice when prompted. After finding the appropriate gun, Crypto can deploy Gastro for additional firepower and to put a body between himself and the enemy.
Natalya Ivanova

"Oh, and spaceman? Good hunting, da?"
A former high-ranking KGB spy, having left the agency with her colleague Sergei due to its increasingly-shadier schemes and oppressive governmental influence. She ends up helping Crypto in his own fight against the KGB, hoping to find answers as to why the agency is becoming increasingly inhumane.
Agent Sergei

"Natalya is a glorious mare who will suffer no bridle. That is why we desire her."

A former KGB spy alongside Natalya, who he trained with in the academy. Like her, he wants to uncover the truth behind the KGB's operations, while also harboring some feelings for her, all while Crypto immediately targets him as a rival for Natalya's affections.

"Forgive me; it seemed best simply to stand clear and give you room to do what you do so well."

A member of the British Intelligence agency M16, under the Queen's secret service in Albion. He briefly joins forces with Crypto in order to drive away the KGB operating on the city. M16, however, is actually the last active international cell of Majestic, and he seeks to avenge the fallen sectors by killing Crypto.

White Ninja: "I liked the first game / I hope this one's just as good / And that I don't die."
Black Ninja: "What if we are all / Characters in video game? / Now my mind is blown!"

Two opposing ninja factions that inhabit Takoshima Island, being once an united school of ninjas under the color gray that was split due to clothing manufacturing disputes. The White Ninja clan resides just outside of the Zen Temple and are quick to ally themselves with Crypto and the Cult of Arkvoodle, while the Black Ninja clan lives on an islet just outside of Takoshima City and have placed their allegiance with the KGB.

"Hail Arkvoodle! Hail Shama Llama!"
A hippie commune leader Crypto rescues from police custody in Bay City to serve as the figurehead of the Arkvoodle Cult. After his rescue, he becomes the quest giver for the Cult of Arkvoodle missions, directing Crypto in how to properly gather support for the plan, while also providing one of the game's strongest weapons if enough Alien Artifacts are collected. He stays as the frontman of the Cult up until the fame starts going into his head a little too much...

"These zhopas must be harder to kill than we thought..."
The KGB agent in charge of their operations in Bay City. He's cornered by Crypto in their secret headquarters in Albion and, in desperation, becomes the first Mutant enemy in the game.
Coyote Bongwater

"We're about to FREE the people of this city! Soon they'll see the TRUTH! And embrace our beautiful new utopia: the Bay City Super-Organic Communal Collective and Compost Farm! ARE YOU WITH US, MAN??"
A spiritual leader of Bay City's hippies, Coyote Bongwater is responsible for distributing a new drink known as "Revelade" - one of whose side effects is the degradation of Furon DNA in humans' genes.
Kojira

A college-aged Japanese girl, mutated by the KGB into a reptilian monster sent to destroy Takoshima.

A warrior race of arthropod-like aliens who originally inhabited Mars, defeated by the Furons during an event called the Martian War. The stragglers managed to escape and crash-land on Earth, specifically the north of Siberia, causing the famous Tunguska Event of 1908 in-universe. Their goal is to irradiate Earth from their second base on the moon and transform it into a Blisk paradise like Mars once was. They're also the main force behind the game's events, as well as the leading power of the Soviet Union for decades behind the scenes.

Tropes applying to the Blisk proper

Tropes applying to the Blisk Mutants

"We had such glorious renovation plans for that pathetic little planet. But no matter; you've merely staved off the inevitable. You can't fight progress, Furon!"

Premier of the Soviet Union and the mastermind behind the KGB's operations across the globe, including the attack on Crypto's mothership. He's plotting to eliminate Furon DNA by destroying humanity itself, an act that seems incredibly genocidal for a world leader. Except he's also a Blisk under a human disguise, seeking to transform Earth into a new home for his race to prosper in after the destruction of Mars by the hands of the Furons.

Introduced in Path of the Furon

A newswoman and field reporter from Sunnywood. She's called in by Crypto and Pox to help them get closer to Dr. Calvin and the Church of Alientology, in exchange for the story of a lifetime from the Furon.

"Submit to my tutelage, Crypto, and when you are ready I will tell you who is behind your recent troubles."

An elderly Furon who escaped his homeworld and crash-landed on Earth, off the coast of China, after thwarting an assassination attempt on Meningitis and being marked for death. Over the past century he's indulged himself in Chinese philosophy and founded an academy to pass down his teachings, with one student in particular, Saxon, growing too power-hungry and leaving his old master to form his own clan. While he dies, Crypto promises to avenge him by discovering the origin of the Nexosporidium warriors' return.

Unfortunately for Crypto, the Master is the one behind the game's events, and the actual conspirator seeking to kill Emperor Meningitis and take the throne of Furon for himself.

Mikey: "For a little guy, you got big balls, I'll give ya that. But this is my town! And nobody's gonna change it while I'm around, you got dat? Vinnie."
Vinnie: "Okay, space midget, let's dance."

A duo of mobster brothers who run Nero's Palazzo, a casino in Las Paradiso and Crypto's main financial competitors during his schtick as a casino owner.

The Nexosporidium warriors were a race of organic cyborgs created by an old group of conspirators within the Furon Empire, long-thought to be extinct after the conspiracy failed to kill Emperor Meningitis. The main opposing force in "Path of the Furon", they're sent to attack Crypto directly, which leads him and Pox into discovering that the conspiracy might not be over.

"You speak our language? You truly are as the angels."

The cult leader of the Lunarian Church of Alientology situated in Sunnywood, who Pox believes to be an incognito Furon disguised as a human, responsible for siccing the Nexos on Crypto.

"With this token of the hated Master, I will secure my place at Saxon's side. As a reward, you may gaze upon my impressive pectoral muscles."

Saxon's right-hand man in the White Dragon Kung Fu Society, feared in Shen Long as a mighty, unstoppable warrior. In reality, he's a cowardly wimp hiding under a barrage of rumors and an admittedly-impressive physique.

"So, old man. This is the end. With the help of my new friends, the White Dragon Kung Fu Society will rule over the Earth! Starting right here in your beloved Shen Loooooooooooong."

The Master's former star pupil, who defected and created his own clan to directly oppose him. Through the White Dragon Kung Fu Society, as he calls it, Saxon rules over Shen Long with an iron fist.

"I would love to some day study your unearthliness in some greater detail... But I have work to do. Au revoir, mes amis."

Oceanographer, environmentalist and CEO of Francodyne Industries, situated in Belleville, France. The man behind the Earth-based production of Synthetic Furon DNA and the Nexos, Pox and Crypto make it their mission to cripple his factories and exact revenge.

Emperor of the Furon race, the one responsible for Crypto and Pox's mission on Earth. In "Path of the Furon", Meningitis is finally revealed in the flesh as the possible leader of a conspiracy involving Synthetic Furon DNA and the long-defunct Nexosporidium warriors, which he now uses as his own personal guard. Crypto and Pox face him at his "summer palace" in the Fourth Ring of Furon in order to get revenge for Crypto's livelihood on Earth supposedly being ruined by him.