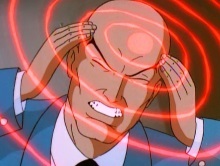 Psychic Powers are a common occurrence throughout various media, fitting into many different genres. It gives a character awesome abilities, but seems to often come at a price: It would seem that much of this same media would infer that hair follicles inhibit the ability to properly access these powers, and so many psychics lack hair.note Ironically, hair functions as a sensory organ in real-life. There's also the new age belief that hair functions as an aural antenna. Fictional portrayals though, might suggest psychic powers work better with less distraction from physical stimuli.

Worth noting that bald telepaths are almost exclusively male, presumably because a bald woman is generally considered unattractive. It also goes along that if a woman is psychic and bald, it's generally a sign that her powers are having a terrible toll on her health.

Sub-Trope of Bald Mystic. May overlap with My Brain Is Big, Bald of Evil, and Prematurely Bald.