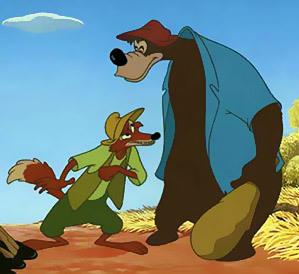 Teaming up The Smart Guy with The Big Guy (or the Evil Genius with The Brute). Sometimes, Brains and Brawn serve as heroes, but other times they're villains (forming an Evil Duo, often the Quirky Miniboss Squad or part of a Terrible Trio, sometimes being Bantering Baddie Buddies, and very frequently a Bumbling Henchmen Duo). Either way, there tends to be some element of comedy inherent in their natures. If the Brain is ever condescending or mean to Brawn, it's because Dumb Is Good.

Typically, since one person has brain but not brawn and the other brawn but not brains, the brawn half of this trope is also an example of Dumb Muscle.

When you have one character with both Brains and Brawn, you've got yourself a Genius Bruiser or a Badass Bookworm, depending on which element is dominant. Sometimes both characters form this dynamic.

Be sure, when adding examples, that the non-brainy one does have great strength. If he's not superior when it comes to physical activity then they're not an example.