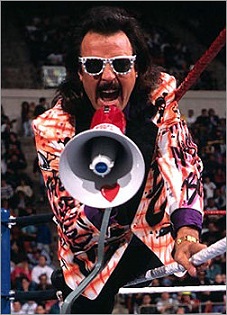 "The Mouth of the South"
Advertisement:

James Ray Hart (born January 1, 1943) is a Professional Wrestling manager, promoter and official from Jackson, MS best known for his work in Memphis and WWE in the 1980s and later in WCW in the 1990s. After a brief recording career as a member of the Gentrys, who had a 1965 hit with "Keep on Dancing," he started in the wrestling business in 1974 under a record producer gimmick.

He was a top Heel manager in Memphis into the mid-1980s as the leader of his Power Stable the First Family. He debuted in WWE in 1985 as the manager for Greg "The Hammer" Valentine before "Luscious" Johnny Valiant took over as the manager of the Dream Team (Valentine and Brutus Beefcake.) Hart was in King Kong Bundy's corner for his famous Squash of SD Jones at the first WrestleMania on March 31, 1985. He managed many wrestlers in WWE, including "Adorable" Adrian Adonis, the Funk Brothers (Terry and Hoss [Dory Jr.]), the Honky Tonk Mannote Where he was billed as "Colonel Jimmy Hart", the Hart Foundation (Bret Hartnote no relation and Jim Neidhart), the Fabulous Rougeau Brothers (Jacques and Raymond), Dino Bravo, The Nasty Boys, The Natural Disasters (Earthquake and Typhoon), Money Inc. ("The Million Dollar Man" Ted DiBiase and Irwin R. Schyster), the Glamour Girls (Leilani Kai and Judy Martin) and, after a face turn in early 1993, the MegaManiacs (Hulk Hogan and Brutus Beefcake.)

Hart followed Hulk to WCW in 1994 and managed him until his match with the Giant at WCW Halloween Havoc 95 when Hart turned heel and sided with the Dungeon of Doom. Hart would stay with the group through its dissolution after WCW Bash at the Beach 97, and would manage the Faces of Fear (Meng and The Barbarian) and Hugh Morrus until the FOF split. In late 1998, Hart announced that he had reunited the FOF and Morrus as the First Family. This lasted until Barbarian inexplicably turned on Meng, kicking him out of the group. Hart added Bryan Knobbs (formerly of the Nasty Boys) and Jerry Flynn to the group, but it just wasn't the same. Hart briefly managed Hail (Emory Hale) and temporarily associated himself with Hogan again in 2000. He is a 1x Southern (Memphis) Heavyweight Champion

In 2001, he and Hulk tried to create their own promotion in Florida called the XWF but it was not successful. Hart returned to Memphis and has continued to manage. He is also the promoter for Wrestlicious, and has worked on-and-off for TNA going back to 2003. He was inducted into the WWE Hall of Fame in 2005.

He worked behind the scenes for years in WCW composing wrestlers' entrance themes. Because many of these themes were blatantly based on existing songs, he is the former Trope Namer for Suspiciously Similar Song, which was originally called The Jimmy Hart Version.

"The Tropes of the South":