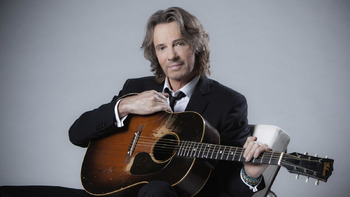 "And I'm looking in the mirror all the time,
Wondering what she don't see in me,
I've been funny, I've been cool with the lines,
Ain't that the way love supposed to be?"
"Jessie's Girl"
Advertisement:

Richard Lewis Springthorpe (born 23 August 1949 in South Wentworthville, Australia), better known as Rick Springfield, is an Australian singer-songwriter, musician, and actor. He started his career as a member of Australian rock group Zoot, with which he played from 1969 until their breakup in 1971.

Embarking on a solo career, he released his debut single, "Speak to the Sky" in 1971, which would be followed by his debut album, Beginnings, a year later, after moving to the United States.

His fourth album, Working Class Dog, produced the biggest hit of Springfield's career with the song "Jessie's Girl", which netted him the Grammy Award for Best Male Rock Vocal Performance. His following albums would also find success, with singles like "Don't Talk to Strangers", "Affair of the Heart", and "Love Somebody".

In addition to his music, he also has a side career as an actor, appearing in a fair number of films and television series, most notably the recurring role of Dr. Noah Drake in American Soap Opera General Hospital, which he maintained for 32 years.