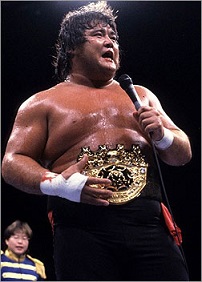 Shinya Hashimoto (July 3, 1965 – July 11, 2005) was a Japanese professional wrestler and promoter best known for his work in New Japan Pro-Wrestling, All Japan Pro Wrestling and his own promotion Pro Wrestling ZERO-ONE from the 1980s until his death.

and the NWA World Heavyweight Title

. He also had the record for the longest reign as IWGP Heavyweight Champion, at 489 days between April 1996 to August 1997, before been broken by Kazuchika Okada in 2017. He made his American PPV debut as a replacement for Akira Nogami at WCW The Great American Bash 1992, in the NWA World Tag Team Title

Tournament. He and Hiroshi Hase defeated the Fabulous Freebirds (Michael Hayes and Jimmy Garvin), and lost later to Barry Windham and Dustin Rhodes. He was inducted into the Wrestling Observer Newsletter Hall of Fame in 2000.

Forced to leave ZERO-ONE in November 2004 due to economic troubles, Hashimoto invested the next year in healing from injuries, but before he could make his return, he died of a brain aneurysm in Tokyo on July 11, 2005 at the age of 40.