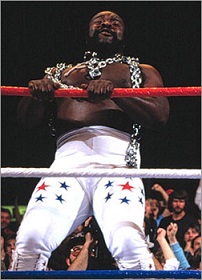 Sylvester Ritter (December 13, 1952 – June 1, 1998), better known by his ring name, the Junkyard Dog (or, simply, JYD), was an American Professional Wrestler from Charlotte, trained by Sonny King and NC best known for his work for "Cowboy" Bill Watts' Mid-South Wrestling then for WWE in the late 1970s until the late 1980s.

He started his career in Tennessee in 1977 before moving on to the Hart Family's Stampede Wrestling promotion. He made his name in Mid-South, where he became the first black wrestler to be a top star in a promotion. He became extremely popular in Mid-South, to the point where, during his feud with the Fabulous Freebirds after they had "blinded" him with hair cream, they needed police escorts to and from the arenas. He eventually went to WWE where he was still very popular but without the same success. He also competed over the course of his career in Georgia, in World Class, in the USWA, in Mid-Atlantic, in WCW and various independents, including defeating Kevin Sullivan at a cross-promotional show put on by ECW, the Mid-Eastern Wrestling Federation and the ASWA in Essex, MD on November 14, 1993.

Among his in-ring achievements, he was a former NWA Mid-America Tag Team Champion

His last public appearance was as a guest at ECW WrestlePalooza 98, May 3, 1998, which was held in Marietta, GA, where he was honored as a "hardcore legend" along with Dick Slater, Bob Armstrong and the Masked Superstar. He died in a car accident on June 2, 1998. He was posthumously inducted into the WWE Hall of Fame in 2004 and to the Professional Wrestling Hall of Fame in 2012.