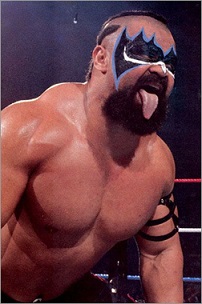 Sione Havea Vailahi (born September 6, 1958) is a Tongan Professional Wrestler best known for his work in the 1980s and 1990s as The Barbarian. He debuted in 1980 after having previously competed in Japan in sumo wrestling. He wrestled under the names Tonga John, King Konga and Konga the Barbarian before settling on "The Barbarian." He competed in various National Wrestling Alliance territories before settling into the Mid-Atlantic initially as a Face. He was turned Heel and teamed with the Warlord as The Powers of Pain. He made his PPV debut in the steel cage battle royal that was the main event of NWA Bunkhouse Stampede, January 24, 1988, with Dusty Rhodes eliminating him to win. The POP surprised many people by jumping from the NWA to WWE in the summer. The team split in 1990, with the Warlord joining Slick's stable and Barbarian joining the Heenan Family. He stayed around for another two years, leaving in February. He then briefly allied himself with Cactus Jack in Jack's feud with WCW World Heavyweight Champion

Ron Simmons. He had a brief run in WWE in late 1994-1995 as "Sionne" of The Headshrinkers after Samu left. He and Warlord were briefly reunited under masks in WCW in late 1995 as "The Super Assassins" before Warlord left. Barbarian joined the Dungeon of Doom and teamed with Meng as The Faces of Fear until that team split. Barbarian and Meng would alternate between teaming and feuding in 1998 and 1999. He has also competed for CHIKARA, Juggalo Championship Wrestling, New Japan Pro-Wrestling and many independents around the world. Among his in-ring achievements, he is a former NWA World 6-Man Tag Team Champion