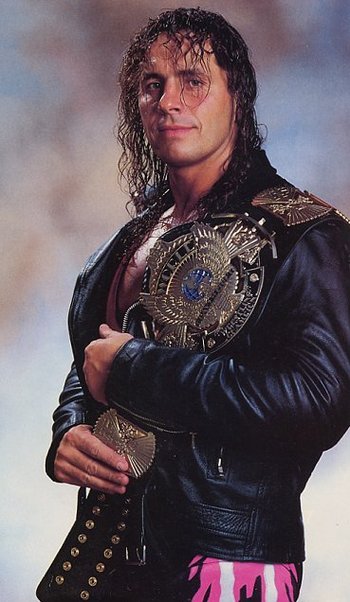 Bret Sergeant Hart, A.K.A. "The Hitman" (born July 2, 1957) is a Canadian retired professional wrestler. One of the biggest Professional Wrestling super stars in The '90s, being simultaneously one of the most technically gifted performers to ever step into a wrestling ring and one of the most troubled and tortured personalities in the business' history by the last years of his career. Hailing from Calgary, Alberta, Bret was a member of a true wrestling dynasty, trained by his famous father Stu in their "Hart Dungeon" rising easily as the most successful member of his prestigious family.

After The Nasty Boys stripped him from his Tag Team title at WrestleMania VII, Bret launched a successful singles career. At SummerSlam 91, he defeated Mr. Perfect for his first singles title in the WWF. By Survivor Series 92, he had defeated Ric Flair for his first World Heavyweight Championship, this ended at the hands of Yokozuna at WrestleMania IX, but in the ensuing craziness that was 1993's WWF, it quickly became apparent that Bret was the most popular wrestler in the promotion. By 1994, at WrestleMania X, he won the title back from Yoko and cemented himself as the promotion's top Face, spending the rest of the year in a bitter rivalry with his brother, Owen "The Rocket" Hart.

He was pushed into the background by 1995 even after he ended Diesel's financially disastrous year-long title reign at Survivor Series 95, it was already set that he would be dropping the title at WrestleMania XII. According to a variety of accounts (including his own), the backstage grudge between him and Shawn Michaels started around that time. Bret took then time off to contemplate his future, returning in November to kick off the feud that would make "Stone Cold" Steve Austin's career and transformed his forever. Bret rose victor at Survivor Series 96, but the feud continued, culminating in a submission match at WrestleMania XIII, which saw Austin become a huge face, and Bret was now the top heel. Bret recruited his brother Owen, his both in-laws (Jim "The Anvil" Neidhart and The British Bulldog), with a family friend "The Loose Cannon" Brian Pillman turning his former Tag Team into a Power Stable, denouncing America and speaking of Canada being better.

Following the controversial "Montreal Screwjob" in November 1997 he left for World Championship Wrestling where Bret was poorly used, never again attaining his levels of success in WWF. His stint would be marred by the death of his younger brother Owen. His career eventually ended in 2000 due to a severe concussion suffered in a match with Goldberg. A stroke two years later after a bicycle accident ensured he would never wrestle again.

(w/Goldberg). In 2006, Bret resurfaced for his WWE Hall of Fame induction prior to WrestleMania 21. and in 2019, became a two-time Hall of Famer as part of the induction of The Hart Foundation. Bret would make an official return to what is now WWE in 2010, making sporadic appearances in a (mostly) non-wrestling role at pay-per-views and Raw... but not before having one last feud with Vince McMahon leading up to WrestleMania XXVI.

On February 1st, 2016, Bret Hart revealed he was dealing with prostate cancer.

Bret Hart is the Trope Namer for:

Example of:
Technician Versus Performer