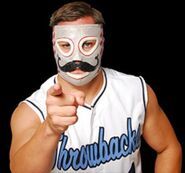 As MosCow The Communist Bovine

with "Mr. Touchdown" Mark Angelosetti as The Throwbacks and was the final CHIKARA Grand Champion

"The Old-Tropey King of Swing":