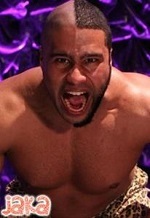 Originally known as Jonny Mangue, Jaka is an American Professional Wrestler known for his work for CHIKARA, Beyond Wrestling and EVOLVE. He debuted in 2007 after training under Magic and Harley Race and worked for Afa's World Xtreme Wrestling, Absolute Intense Wrestling, Beyond Wrestling, WWS, Dragon Gate USA, Jersey All Pro Wrestling and other promotions before starting the Jaka gimmick in 2012. He arrived in CHIKARA in 2014 as part of Sidney Bakabella's Wrecking Crew, which was part of The Flood, the amalgamation of Heel groups out to destroy CHIKARA. He joined Die Bruderschaft des Kreuzes at the start of 2016 and left after his DQ victory over Eddie Kingston on June 11th.

As for his in-ring achievements, he is a former 2x EVOLVE Tag Team Champion

with Chris Dickinson as Catch Point and a former WiF! Banana Champion

, that is, a title that was represented by an actual banana.

"The Tropes of the Jaguar":