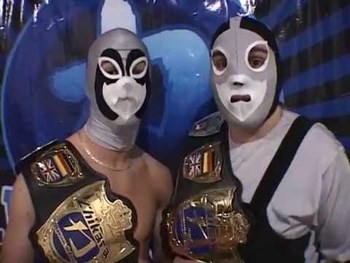 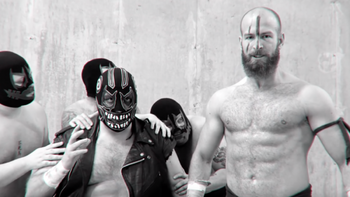 as The Dark Order
Advertisement:

Player Uno (aka Evil Uno) (Nicolas Dansereau) and Stupefied/Player Dos/Stu Grayson (Marc Dionne) are a Canadian Professional Wrestling Tag Team who have performed for most of their history as The Super Smash Brothers, but are now known as The Dark Order. They debuted in 2006 and wrestled for the International Wrestling Syndicate, arriving in CHIKARA in 2007. Along with holding the Campeonatos de Parejas, Player Dos also held the CHIKARA Young Lions Cup

and they are former PWG World Tag Team Champions

. They have wrestled for Ring of Honor, CZW, Dragon Gate USA, and numerous other promotions around the U.S., Canada and Europe. Most recently, they signed with All Elite Wrestling in 2019.

They have nothing to do with Nintendo's Mascot Fighter series of the same name.