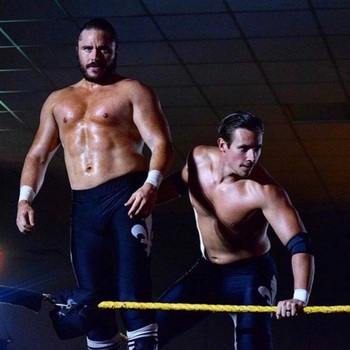 3.0 is a Canadian Professional Wrestling Tag Team originating from Quebec, consisting of Scott "Jagged" Parker (born Jeffrey Parker on March 20, 1983) and Shane "Big Magic" Matthews (born Matthew Lee on December 7, 1983). They were signed with WWE from 2016-2021, performing on both their NXT and 205 Live brands under the ring names Chase Parker and Matt Martel respectively, where the team were known as Ever-Rise. They have since appeared on All Elite Wrestling as Jeff Parker and Matt Lee respectively, under the name 2.0 (alternatively spelled "2point0"), before having their name changed to "Cool Hand Ang" Angelo Parker and "Daddy Magic" Matt Menard as part of their association with Chris Jericho.

The team is best known for working for CHIKARA and International Wrestling Syndicate (IWS), but have also made appearances for several other independent promotions, including Ring of Honor (ROH), Combat Zone Wrestling (CZW), Pro Wrestling Guerrilla (PWG) and Independent Wrestling Association Mid-South (IWA-MS). They have won the CHIKARA Campeonatos de Parejas twice and the IWS Tag Team Championship twice.