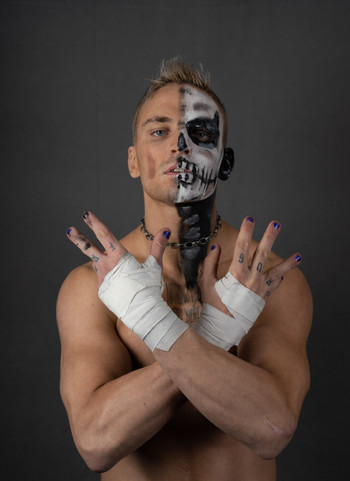 Oh you want a grave kept secret that I never tell / I'm up in Heaven but I came from Hell / I fell! So do you!

"People come up to me and they say, 'You should really tone it down, Darby - be safe.' Unfortunately, I don't know if I have that switch. And does that scare me? Yes. But it's all I've ever known."
— Who is Darby Allin?

Darby Allin (real name Samuel Ratsch, born in January 7, 1993) is an American professional wrestler currently working for All Elite Wrestling. He began his career working for independent circuits before making his name in AEW.

A long-time punk rock fan, he derived his ring name from Darby Crash and GG Allin, and he is perhaps best described as not just a punk, but a rebellious, death-defying one. While further aspects of Allin's character include his fondness for skateboarding (occasionally making his way to the ring on one) and his theatrical (and often silent) promos, he is primarily a disturbed individual with a troubled past and a fascination with death and danger that manifests in high-risk, high-flying daredevil theatrics.

The dark past isn't exclusive to his character. When he was five, Ratsch was the passenger in a car crash that resulted from his uncle, who died in the crash, driving while intoxicated. This became one of the reasons for him choosing to live Straight Edge, as well as the inspiration for his distinct half-skull face paint, which he has explained as the result of him being "half-dead" since the crash.

Perhaps as a result of this unique style, Darby Allin was one of the breakout new stars of All Elite Wrestling in 2019 and 2020, eventually becoming TNT Champion in November 2020 at AEW's Full Gear PPV. Champion or not, Darby Allin is (much like the tattoo on the back of his head) relentless.

Tropes to Coffin Drop to: