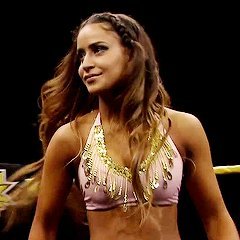 She began her career in her teens, apparently training in secret without her conservative family knowing. She made her debut in 2013 under the name Jasmin Areebi — alternating between that and just Jasmin. It didn't take long for WWE to come calling, and she was signed in 2015 when she was just nineteen years old. After competing on live events for a while under her indies name, she became christened Aliyah.

Aliyah made her debut in a #1 contender's battle royal in 2016, and then made her singles debut a couple of months later against Carmella. She has been featured on NXT's documentary series Breaking Ground.

She has the distinction of being the first female talent in WWE to be of Arab descent (Syrian and Iraqi).