Ride / Back to the Future: The Ride 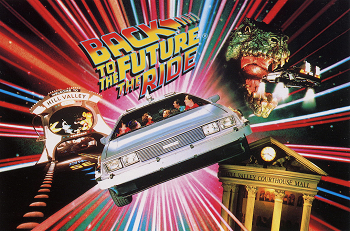 You and seven other people have an opportunity to volunteer at the Institute of Future Technology (IFT) for Dr. Emmett Brown's Time Travel experiment in his new eight-passenger DeLorean traveling only one day into the future. Doc contacts you through his hover-cam while he's in the year 2015 (presumably, a few hours before Doc and Marty showed up in Part II of the films). He knows that, somehow, Biff has gone missing from the year 1955, but has no idea of where or when he is. Shortly after Doc returns to the present, we learn that, when some of Doc's IFT assistants were working on a time travel experiment in 1955, Biff must've stowed away. Doc tries to stop him, but unfortunately, Biff managed to trap Doc in his own office.

As Doc is unable to leave his office, he decides to enlist you and the other seven volunteers to capture Biff by bumping into the car that Biff is in order to return to the present. He is able to use his remote control, though to guide you along. Biff makes his first stop on October 25 of 2015, as he leads you on a chase through Hill Valley causing you to crash into some signs. Biff then goes back by about a million years, during one of the ice ages. He tries to stop you by breaking the ice pieces and manages to succeed, momentarily. Finally, Biff goes back by a few more million years, during the time of the dinosaurs. Biff tries to sic the dinosaurs on you, but it manages to backfire on him. The same dinosaur then swallows the car that you're in, but quickly spits you back out, even as Biff is now pleading for you and Doc to rescue him. Finally, you manage to bump Biff and bring both cars back to the IFT in the present.

Also shown during the lobby monitor are two short films:

The ride opened at Universal Studios Florida in 1991, with it later also opening at Universal Studios Hollywood in 1993 and Universal Studios Japan in 2001. Raved as an instant classic upon its release, the ride became a major staple of the parks for years, until it was sadly and unexpectedly decommissioned at Hollywood and Florida in 2007 to make way for the The Simpsons Ride. As a Shout-Out to their predecessor, though, Doc Brown appears in the Simpsons lobby monitor, in a short animation where Professor Frink's own time meddling accidentally causes Doc to sell the Institute to Krusty the Klown. After 25 years of operation, the last iteration of Back to the Future: The Ride closed on May 31, 2016 at Universal Studios Japan. An alternate version of Despicable Me: Minion Mayhem was announced as its replacement, which opened in 2017.

In 2009, to rectify its untimely closure, Universal made the ride videos available to own, on a 2-Disc DVD of the original Back to the Future movie. The 2010 and 2020 Blu-Ray releases of Back to the Future Part III later included these as well.

Tropes shown in the simulator ride include:

"Go forth, time travelers, and remember the future is what you make it."