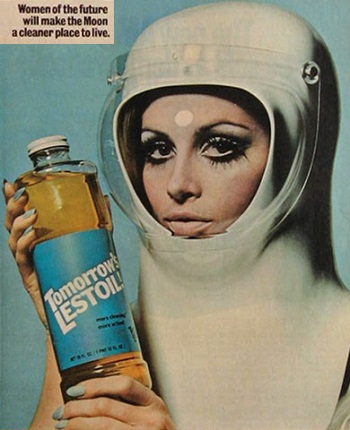 Groovy space suit, baby.
"Zeerust: The particular kind of datedness which afflicts things that were originally designed to look futuristic."
— The Meaning of Liff
Advertisement:

Something — be it a piece of technology, character design, outfit, vehicle or building — used to be someone's idea of futuristic. Nowadays though it has, ironically, acquired a quaint sort of datedness to it: inevitably, it will be more reminiscent of the era the work came from. Also sometimes called "Retro Futuristic".

Think of mobile phones as a simple example. Once, they were large, cumbersome, and it was considered that they would only ever be available to the rich. Works from that era will tend to depict even a 'futuristic' phone as still no smaller or sleeker than a brick plugged into a suitcase. Later, when they became widely available and shrank dramatically as technology improved, for a while it was assumed they would keep getting smaller and smaller; depictions of the future from this period will show people using tiny communication devices. Again, Technology Marches On and the preference has shifted to them to growing increasingly large once more yet thin enough to slide into the back pocket of your jeans. Any current depiction of the future featuring such slablike devices will also turn into a time capsule of the period it was made in, if and when flexible and foldable phones become commonplace. And so on.

Sometimes the dated feeling is due to this sort of straight-line extrapolation of trends ascendant when the work was written into the (far) future. Sometimes the datedness is a bit more subtle. It's possible that the prediction turned out to be technologically or aesthetically accurate (or at least on the right track), but still fails because of the designer's implicit assumption that social values will be the same in the future as in their own time — as demonstrated in the page image.

Often the datedness behind zeerusty designs lies in the attempt of the designers to 'improve' on the technology of their time, only to find out that more mundane designs are actually far more efficient if advanced engineering and craftsmanship are used on them. Note that this is not always a bad thing: often the dated vision of the future is a lot more imaginative than anything being attempted today, with more modern, 'realistic' depictions striking viewers as bland and boring precisely because of the authenticity.

Another part of this often comes from a related issue: especially in more visual mediums, set, costume and prop designers have no choice but to depict the "future" with the materials they have on hand in their present day. When thin, molded glass and clear plastics aren't very readily available to you, you aren't going to put together a prop that looks like an iPhone fifty years before one exists; you're going to use black hard plastic, inexpensive chromed trim, a grill straight off a then-current telephone, and you're going to end up with a TOS communicator and you're going to be satisfied with it because you have other things to work on. This can lead to some particularly hilarious moments when a long running franchise wants to produce a prequel or somesuch, but the set and prop design ends up looking different and more "properly" advanced simply because the designers of the new product have access to the fruits of decades of additional real-world technological progress.

As such, when a Long Runner franchise is outflanked by the progress or direction of technology/aesthetics/societal values while it is still going on, but it is tied to its pre-established version of them, this may lead to Zeerust Canon over time.

Sometimes Zeerust is deliberate. If a Retraux work presents a supposedly past vision of the future, or 20 Minutes into the Future (i.e. the present), it will inevitably invoke Zeerust or Raygun Gothic.

Gets its name and definition from The Meaning of Liff by Douglas Adams & John Lloyd, a book of neologisms concocted by the two. Adams and Lloyd mostly used actual place names for their words — Zeerust's name is borrowed from a South African town,

which in Real Life has nothing to do with the phenomenon.