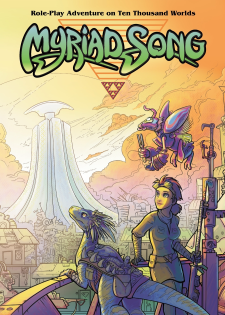 Myriad Song is a sci-fi tabletop RPG made by Sanguine Games (the same company responsible for Ironclaw). The game draws heavy inspiration from the New Wave of science fiction of the late 1970s and early 1980s, as well as sci-fi comic books and progressive rock.

For an untold number of generations, the universe was ruled by the Syndics - aliens "strange and unknowable", who conquered and enslaved countless worlds. They used the power of Xenharmonics to travel the cosmos, to power their technology, and generally to warp reality to their will. They would genetically engineer the species they conquered, oppress them, assimilate them, or whatever would work best with their intentions.

And then, a hundred years ago, the Syndics suddenly vanished. What happened to them? Who knows?

What is known is that the Syndics' disappearance left a power vacuum; one which their former servants are trying to fill. Many interplanetary factions struggle for power and dominion, from the Solar Creed (which offers free energy at the price of freedom) to the Malmingetti (who just want to conquer everything) to the Concords (in a nutshell, For Science!), and everyone and everything in-between. And then there's the question of what might be lurking in the undiscovered parts of space...

Mechanically, Myriad Song uses the Cardinal System, the same system used in Ironclaw. Naturally, though, there are heavy modifications to allow for the difference in settings, including more in-depth combat rules. There are also far fewer playable species (referred to here as Legacies), but with the exception of humans, each one has their own "gift tree" to improve their innate abilities. Each character can also take gifts to become cyborgs, mutants, or even Conductors - rare people with the ability to harness Xenharmonics.