Literature / For Us, the Living: A Comedy of Customs 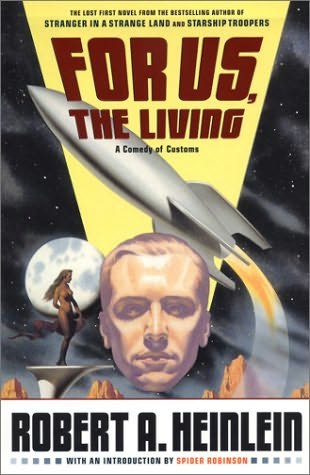 For Us, The Living: A Comedy of Customs is a science fiction novel by Robert A. Heinlein, written in 1938 but published for the first time in 2003. Heinlein admirer and science fiction author Spider Robinson entitled his introductory essay "RAH DNA", as he believes this first, unpublished novel formed the DNA of Heinlein's philosophy.
Advertisement:

The published version of the novel contains an afterword by Robert James, Ph.D., Heinlein Society member and Heinlein scholar, explaining how the only known surviving typescript of this "lost" work was finally discovered in a garage.

Perry Nelson, a normal 1939 engineer, is driving his automobile when he has a blowout, skids over a cliff, and wakes up in the year 2086. Though he was apparently killed in the summer, he re-appears in extremely cold snow, nearly dies again by freezing, and is saved by a fur-clad woman named Diana. The exact circumstances of his being killed and reborn after a century and half are never explained.

The later 21st Century people seem strangely incurious, showing little interest in how he had come to be among them and rather take his appearance for granted and proceed to explain to him the details of the social and political set-up of their world.

Alternative Title(s): For Us The Living