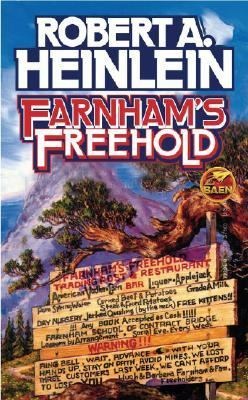 Written by Robert A. Heinlein in the early sixties and published in 1964, Farnham's Freehold is one of his most Genre-Busting works.The novel begins with a sequence of events inspired by the Cuban Missile Crisis. The story is told from the point of view of Hugh Farnham, whose dysfunctional family is abruptly faced with nuclear Armageddon. Hugh's homemade fallout shelter provides them with temporary sanctuary... but one of the bombs dropped - a secret Soviet super-weapon - inexplicably sends the shelter and its occupants somewhere else.They arrive on Earth, and in the same spot - but they cannot tell if this is Another Dimension, the past, or the future. The climate has shifted and there is no sign of humanity at all. The 'second act' of the story is a tale of basic survival, the slow disintegration of Hugh's family - including the death of his beloved daughter - and a period of Unresolved Sexual Tension between Hugh and his daughter's friend Barbara.Then hovercraft appear, abducting the survivor/settlers and ushering in the third act - which is set in a racist dystopia dominated by people of African ancestry, in which whites are slaves kept tranquil by drugs and, in some cases, butchered and eaten. The survivors become slaves of varying status... except for their former servant Joe, who as a black man is automatically entitled to 'free' status and parlays his experiences into high status. Hugh's wife and son become 'content' with their low rank, but Hugh and Barbara commit themselves to escape at any cost. When an unexpected ally offers them a risky method of returning to their own era, Hugh and Barbara leap at the chance. The book ends with the quote above, stating that they survived the apocalypse and implying that they spend the rest of their lives trying to avert the Bad Future.