Literature / Farmer in the Sky 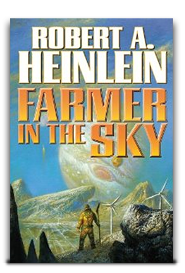 Farmer In The Sky is a juvenile science fiction novel by Robert A. Heinlein first published in 1950.
Advertisement:

William "Bill" Lermer and his family emigrate from Earth to Ganymede, one of Jupiter's moons, which has been terraformed into an environment capable of supporting humans but still needs a lot of work to properly support them. In best Heinlein tradition, it's something close to a long essay on how to colonize new worlds disguised as a novel, with a Slice of Life plot and characters with lots of pioneer spirit.The novel was awarded a Retro Hugo Award in 2001.