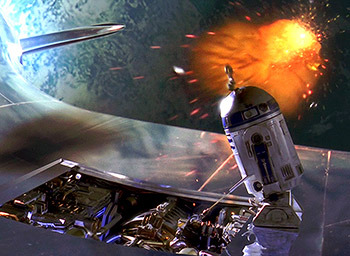 "Who on board is smart enough to fix the propeller, but stupid enough to go out there?"
— Scrooge McDuck, DuckTales (1987), "The Uncrashable Hindentanic."
Advertisement:

Our heroes are in an aircraft, falling. Perhaps they've been shot down, or maybe their vehicle didn't work in the first place. No need to worry, though. Someone (usually the Gadgeteer Genius or Mad Scientist of the cast) will get everything back into working order. In mid-air. Before hitting the ground.

This can be as simple as flipping some switches (Anakin pulled this one off with his podracer) or climbing out and cranking the engine until it restarts. Of course, there's also the option of rebuilding the engine in midair.

Depending on how fast you're falling when you finally pull out of the dive, you might be acting under the assumption that it's Not the Fall That Kills You….

Strangely, this can be Truth in Television - the pilots and crew of early cargo planes learned that certain maintenance operations could be conducted without landing if you had Suicidal Overconfidence in your grip and no fear of heights. Long-distance bombers in WWII damaged during bombing runs also had a choice between attempting this trope, or one of two other options.

Buck performs mouth-to-mouth on a pterosaur knocked unconscious by a mid-air collision and just barely revives it in time.

Buck performs mouth-to-mouth on a pterosaur knocked unconscious by a mid-air collision and just barely revives it in time.