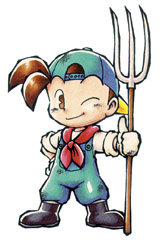 Have pitchfork, will travel.
"Is your main character a young farmhand with mysterious parentage?"
— The Fantasy Novelist's Exam

A staple of fantasy adventures. Farmy McFarmboy is just an ordinary, humble young farmboy/hunter/etc. living and working in a simple, tranquil, pastoral land until destiny (and his mentor) comes knocking, normally knocking down his house or town in the process. Farmy is typically very whiny and resistant to the idea of being the Chosen One but eventually accepts the idea. Generally, he's the son of somebody important — either the Big Bad or The Dragon — or else from an ancient line of wizards or kings and is either A) raised by an aunt or uncle or B) their parent has fled their old life of adventure.

To make things safer, any such heritage will be spoiler marked, no matter how obvious.

Does not have to be male (which doesn't mean he's the Spear Counterpart of the Farmer's Daughter), but almost always is. Similar settings with a female protagonist are more likely to have her as a Princess Protagonist.

One common beginning for The Hero's Journey. Very common in stories set in the past, because pre-industrialization, and for most of the history of human civilization, most people were farmers. These days, due to prevailing urbanization and universal education, the equivalent is likely to be an Ordinary High-School Student.

This is such an old trope it's died and been reborn several times already (who better to keep a horse in good condition than a farmer), and there are a few traditional ways for the story to pan out. Generally, the kid will either go from Rags to Riches (or even all the way to Royalty), or he'll reject the strange new world he's saved and return home to accept the Call to Agriculture.

As David Eddings (a major user of this trope) explained in The Rivan Codex, it is a good way to explain how your fantasy world works within the context of the story. The reader learns the rules along with the main character.