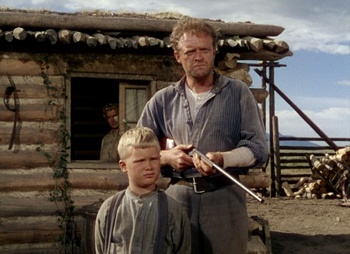 "The one real man in this valley"
"Lord, we cleared this land. We plowed it, sowed it, and harvested it. We cooked the harvest. It wouldn't be here and we wouldn't be eating it if we hadn't done it all ourselves. We worked dog-bone hard for every crumb and morsel, but we thank you Lord just the same for the food we're about to eat. Amen."
— Charlie Anderson, Shenandoah
Advertisement:

A person who seeks to claim land by improving it through agriculture.

This trope came into its own in America with the Homestead Act of 1862, which offered 160 acres of public land "free" if a homesteader filed a claim and succeeded in making a viable farm of the land.

In fiction, the Determined Homesteader is determined to have a place that he owns in his own right, come hell or high water. And generally, every horrible thing that could happen to a piece of land will during the course of the story. Drought, flooding, fire, locusts, hostile natives, land barons who want all the acreage in the valley, and anything else the writer can throw at the homesteader will not be neglected. But somehow, the Determined Homesteader will hold on. Even if a good-faith offer to buy the land at a fair price comes up, he won't sell, no sir.

Often has an equally resolute wife, as well as several children of both sexes.

Even killing a Determined Homesteader doesn't necessarily end the story, since most of them will leave a Determined Widow. Commonly found in Westerns. Usually part of Settling the Frontier.