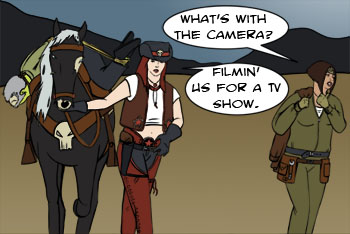 A hogtied zombie slung over a zombie horse? No big deal in this Weird New West.
Every sunrise they greet a new dawn of the dead
They’re out boltin' and brandin' and countin' the head
No glory, no diamonds, no frills and no mansion
It just, just pays the bills when you’re out zombie ranchin'
— Opening lines of the Zombie Ranch Theme Song

is a weekly webcomic produced by the husband and wife team of writer Clint Wolf and artist Dawn Wolf. Having its start in the Fall of 2009, the story is a twist on the usual elements of the zombie genre, heavily influenced by Science Fiction, westerns and "dangerous job" reality television.

Sometime in the 21st century, the Great Zombie Plague wiped out a fair portion of civilization as we know it. But it wasn't the end. Humankind adjusted themselves to the disaster, fighting back against the undead menace until the immediate threat was over and an uneasy equilibrium was achieved. In the U.S.A. the aftermath left pockets of walled-off, technologically advanced Safe Zones with occasional oversight from the weakened Federal government, but much of the country remains a Wild Zone where law and order is scarce and the surviving denizens eke out their living with a frontier mentality reminiscent of their pioneer ancestors.

Set about twenty years after the declared end of "The Wars", Zombie Ranch is the title of a reality show concept being filmed by the powerful ClearStream Corporation, which is looking for new entertainment fodder to broadcast to its Safe Zone populace. In this world the existence of zombies is not only accepted fact, but a huge new industry has grown up that is based around harvesting and processing them for profit.

Several remote controlled camera drones have been deployed to a Wild Zone ranch owned by Susannah Zane, the latest in a long line of Texas cattle ranchers. The Zanes lost their livestock to the teeth of zombies, but found a replacement herd in those same undead hordes and adapted their techniques and know-how to strange new times.

Zombie ranching is about the most dangerous job there is, but for Suzie and her compadres, it's just a day in the (un)life...