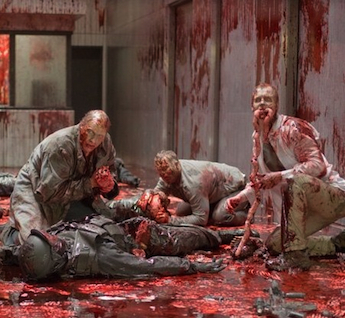 Courtesy of the Ancient Ones.
Dr. Langham: Has anyone given any thought to what these creatures eat?
Scientist: Ben, they eat people.
Dr. Langham: That's just my point. These viral mutants used to be humans, correct? And humans are omnivores. We require the four basic food groups to survive, yet the virus creatures are living on a completely carnivorous diet. How? What does the virus do that changes such a basic attribute?
Scientist: You might be overthinking this a bit.
— [PROTOTYPE 2]
Advertisement:

Flesh-Eating Zombies are the type usually found in a Zombie Apocalypse. They consume the skin, brains, or various other organs of the living, and sometimes infect survivors, who become zombies themselves — which makes them a lot like a ghoul, really. Can also be merged with a Voodoo Zombie or Plague Zombie. They show a lot of the characteristics of the actual European folkloric vampire, before Gothic novelists made them sexier and cleverer.

This is one of the most common zombie tropes to be parodied; parody zombies always moan for brains, even though that specific form was never very common.

A subtrope of Hungry Menace. Overlaps with No Zombie Cannibals when the undead ignore each other as a potential food source.