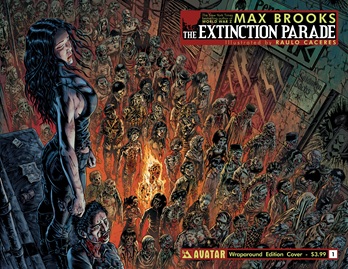 The Extinction Parade is a story by Max Brooks, author of The Zombie Survival Guide and World War Z, about vampires in a Zombie Apocalypse battling to save their food source from being devoured by the less glamorous kind of undead. It features many of the same themes that World War Z used, namely the world's (especially the Western world's) dependence on fragile supply chains that are vulnerable to resource shortages, Global Warming, and other disruptions, only this time in an Urban Fantasy setting with "the First World" and "oil" swapped out for "vampires" and "human blood".

The Extinction Parade began life as a short story

published by The Daily Beast and in a collection by Brooks, Closure, Limited and Other Stories from the Zombie Wars

, and was later adapted into a comic book published by Avatar Press with artwork by Raulo Caceres.