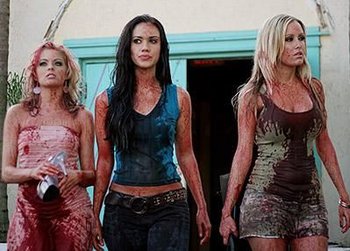 Zombies! Zombies! Zombies! (also known as Strippers vs Zombies and released under this title in Japan and Germany) is a 2008 American zombie comedy film directed by Jason M. Murphy, starring Jessica Barton, Tiffany Shepis, Hollie Winnard and Jay Laga'aia. It was filmed during 2007 and was released direct-to-video in 2008.

A drug experiment gone wrong produces a league of blood-thirsty zombies. It is up to a small band of exotic dancers trapped in a gentleman's club to fight back. Together they must rely on their wits and skills to survive the night, and pray that they don't become victims of the flesh-eating zombies!