Film / Land of the Dead 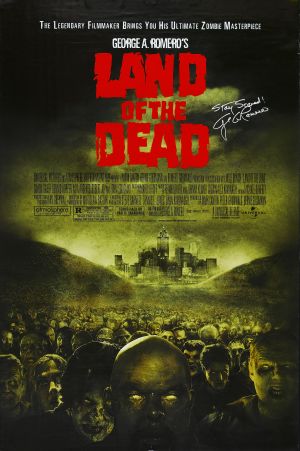 Land of the Dead (2005) is the fourth movie in the Living Dead Series written and directed by George A. Romero and starring Dennis Hopper, Simon Baker, John Leguizamo, Asia Argento, Eugene Clark, and Robert Joy.

Set After the End (and years after the original Night of the Living Dead (1968)), Pittsburgh — through geographic blessing and a corporate leader's ambitious mobilization — has remained standing in the post-apocalypse. The rich get to live out their lives much like before, and the less fortunate at least avoid being attacked by the walking dead.

The movie focuses on a group of survivors that go out into zombie infested lands to retrieve supplies (sometimes vital, sometimes not) for a city that can no longer produce anything of any worth. Zombies following on from Romero's Day of the Dead (1985) have become smarter, aping their old lives remarkably well; led by a zombie known as "Big Daddy", a large group of the living dead attack the city en-masse, leading to the destruction of the civilised world as the very walls that kept the zombies away becomes their prison.

Had a Video Game tie in called Land of the Dead: Road to Fiddler's Green.