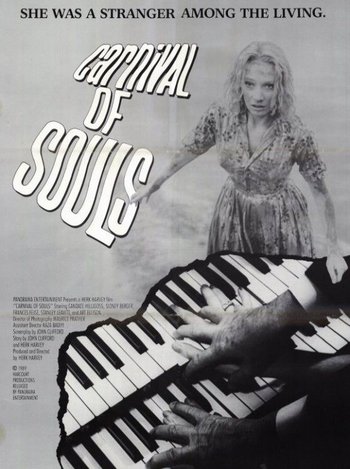 "What happened to the others? How did she escape? She doesn't know. Indeed, she doesn't care. She's a brittle, cynical woman who works as a church organist but doesn't take religion seriously. That's despite the fact that the organ seems to be trying to tell her something. There is a sensational overhead shot in an organ factory, looking down past the steep and angled pipes to her diminutive figure far below, and another effective moment when she's in a car on a deserted highway and the radio only picks up organ music."
—Roger Ebert's review

Carnival of Souls is a low-budget ($33,000 in 1962note About $283,000 in early 2020) American B-Movie horror film produced, directed, and co-written by (and co-starring) Herk Harvey, which did mediocre business upon release but has become enough of a Cult Classic to merit inclusion in The Criterion Collection. In fact, some people consider it to be the best "B" movie ever made; both David Lynch and George A. Romero have cited it as an inspiration, with Romero stating that Carnival of Souls gave him the idea for Night of the Living Dead.

A young lady named Mary (Candace Hilligoss) is riding in a car with her girlfriends when another car pulls up and challenges them to a drag race. Mary's friend unwisely accepts, and the two cars zoom off on a high-speed race, which ends when Mary's car plunges off of a bridge and into a river.

Police and first responders are dragging the river in search of the car when a dazed Mary staggers onto dry land. After she recovers she leaves town, having been hired to play the organ at a church in Utah. All is not well, however, as Mary starts to experience terrifying visions of a ghoulish, undead man (Harvey) stalking her. When she isn't having these horrifying visions, she is experiencing other terrifying interludes when, for no apparent reason, no one can see or hear her. And then there's the creepy abandoned old amusement park, which Mary inexplicably finds herself drawn to...

One of only a few films to be riffed twice by Mike Nelson: First on the colorized DVD released by Legend Films, the second time with help from Kevin Murphy and Bill Corbett on RiffTrax.

In 1998, a Wes Craven-produced In Name Only remake was released, which received mixed, mostly-negative reviews. While it, too, is available on DVD, it's a pretty safe bet that it won't ever get a Criterion release.