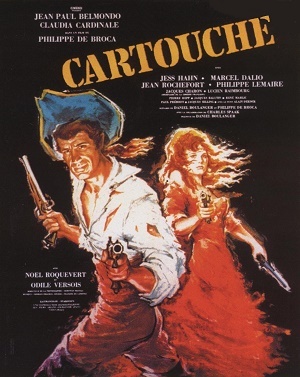 In early 18th century Paris at the Cour des Miracles

, a young thief named Louis Dominique Bourguignon (Belmondo) is 'working' in the gang of crime lord Malichot (Marcel Dalio) but their ways are too 'unethical' for him. He provokes Malichot, flees the Cour des Miracles and joins the army where he makes two new friends, La Taupe (Jean Rochefort) and La Douceur (Jess Hahn). They survive by hiding out on the battlefield, and decide to rob their Marshal of his gold. Fleeing, they stop at an inn where they meet Venus (Claudia Cardinale), a beautiful gypsy girl who has been taken prisoner. They rescue her, Louis Dominique falls in love with her and she joins them.

Louis Dominique then returns to Paris, overthrows Malichot at the head of his gang, starts using the named he styled himself earlier, "Cartouche" (which means "cartridge" in French), and throws the gang in a series of audacious robberies of the rich people. He decides to distribute a large part of the loot to the poor, which earns him both the sympathies of the people and an intensified track from the Regency police troops, led by Lieutenant general Gaston de Ferrussac (Philippe Lemaire). On top of that, Cartouche gets infatuated with Ferrussac's wife, Isabelle (Odile Versois).