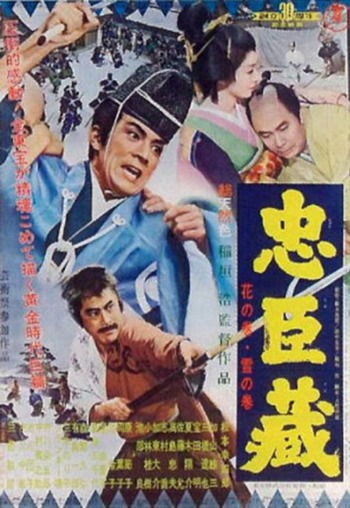 Chushingura (Chūshingura: Hana no Maki, Yuki no Maki—"Chushingura: Story of Flower, Story of Snow") is a 1962 film directed by Hiroshi Inagaki.

It is one of many, many works adapting the Japanese Based on a True Story story of The 47 Ronin. The time is 1701. Lord Asano of Ako has been charged by the local shogun with preparing a reception for the emperor in Edo Castle. Lord Kira, chief of imperial protocol, has been appointed by the shogun to give Asano guidance on how to make the castle and its people ready for the imperial reception.

The two are polar opposites. Asano is a young man, honest, honorable, well-liked by his people. Kira is a cowardly weasel who has used his position at the imperial court to extract bribes from noblemen. The idealistic Asano, who opposes corruption in all forms, refuses to give the bribe that Kira is very broadly hinting about. Kira in turn hates Asano for not paying him off. Kira continually insults and provokes Asano until the latter snaps and slashes at him with his sword.

Unfortunately, drawing your sword in an imperial castle is a capital offense, and consequently, Asano commits seppuku on the emperor's orders. Kira gets away with nothing more than a couple of scars.

This leads the Asano Clan broke and disgraced. The samurai that served Asano are masterless Rōnin. Outraged at the unjust execution of their lord, they debate committing seppuku themselves, or fortifying Asano's castle and going down fighting. However, Oishi Kuranosuke, chamberlain of Asano's household and leader of the ronin, recognizes that their true enemy is Lord Kira and the only way the Asano Clan can regain its position and honor is by revenge. He pretends to surrender and spends over a year acting as a drunken reprobate, thus lulling Kira and the authorities into a false sense of security, while at the same time planning a raid on Lord Kira's castle.

Chushingura is a 3 1/2 hour epic in widescreen and color. Among the All-Star Cast are Toshiro Mifune in a small role as Tawaraboshi (another ronin, sympathetic to the forty-seven) and legendary star Setsuko Hara as Riku, Oishi's wife. It was Hara's last film appearance.note Famously, Hara disappeared from public life completely after this movie, never taking another part or giving an interview or even being photographed for 53 years, until her death in 2015.