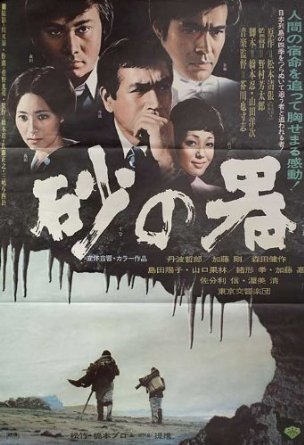 Castle of Sand is a 1974 mystery film from Japan, directed by Yoshitaro Nomura.

Inspector Imanishi and his younger colleague Detective Yoshimura are part of a task force investigating a mysterious murder. A man in his sixties has been found dead at a railway station, his head caved in. The body has no ID. The only clue is a witness at a bar who overheard the cryptic phrases "Kameda did this" and "Kameda doesn't change." The detectives make little headway until a man responds to the missing persons report and identifies the dead man as his adoptive father, Kenichi Miki. Miki is revealed to be a former provincial police officer who had no enemies, never had to investigate serious crimes in his small village, and was beloved by everybody. Imanishi is at first quite puzzled, but dogged detective work yields a connection to well-known music conductor and composer Eiryo Waga, who has something to hide.

An adaptation of a novel, Inspector Imanishi Investigates.