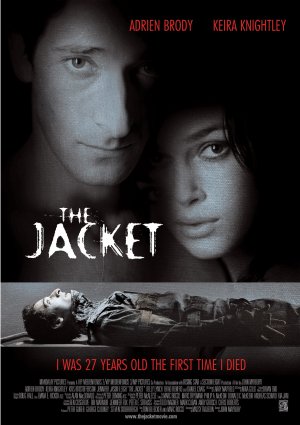 "When you die, there's only one thing you want to happen. You wanna come back."
— Jack Starks
Advertisement:

The Jacket is a 2005 independent film starring Adrien Brody and Keira Knightley. Jack Starks (Brody) is a gulf war veteran that survived a nearly fatal gunshot wound to the head. Upon returning home, Jack meets a young girl and her mother stranded on the side of the road. He helps the pair by fixing their car. Later, Jack hitches a ride with a young man headed north, but when the two men are pulled over by a police officer, Jack spontaneously suffers an amnesiac black out.

When he awakes, he is in court and is being held responsible for the murder of the police officer. The jury determines he is not guilty on account of insanity, and Jack is locked away in Alpine Groves, an asylum for the criminally insane. There, Jack undergoes experimental treatment for his supposed mental illness, and he begins experiencing strange visions of the future. In these visions, he encounters a grown version of the girl he previously met (Knightley), and he learns startling truths of upcoming events.

Over time Jack learns to control and manipulate his visions so he can uncover more of the mystery surrounding Alpine Groves, his alleged mental illness, and the history of the girl he encountered. With this knowledge, Jack sets out to right several wrongs in the lives around him, and to potentially find freedom from the asylum. Time is running out, however, as he uncovers an unexpected side-effect to the experiments...