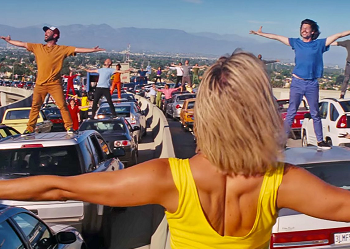 "It's funny, isn't it? You would never suspect that everyone at this school is a professional dancer."
— Not Another Teen Movie
Advertisement:

We've all seen Crowd Songs. A crowd of random people spontaneously burst into a choreographed song and dance number. A pair of red fire trucks pull in from opposite ends of the street and start spraying arcs of water over the crowd to make a rainbow. A flock of animated sparrows flying overhead decide to drop down and whistle a melody. The Big Bad might even wander out of his lair to do a little number with a cute kid. But how is this possible? Spontaneous Choreography is the ability for fictional characters to tap into a pseudo-hive mind and perform amazing choreography with little to no practice.

It is not restricted to the Crowd Song either. Sometimes, the dance has been planned in advance, for instance in a school-sponsored dance competition, but the heroes have had no time to practice while on their adventure. No problem, just huddle up for a few seconds, and you have an instant dance routine.

It might not even be a dance. Ten seconds left in double overtime? No problem, let's go for that trick play we've only practiced once. It's bound to work. And it always does.

In short, this trope is for anything that has all the trappings of a crowd song, but without the crowd and not always with a song.

Compare Summon Backup Dancers, where the participants/dancers in question are called from out of sight.

This can be Truth in Television — ever heard of a "flash mob"? — but the illusion of spontaneity is simply that; an illusion. Though the outside observers may be surprised, the performers themselves already know their steps and when to meet.