Film / She's All That 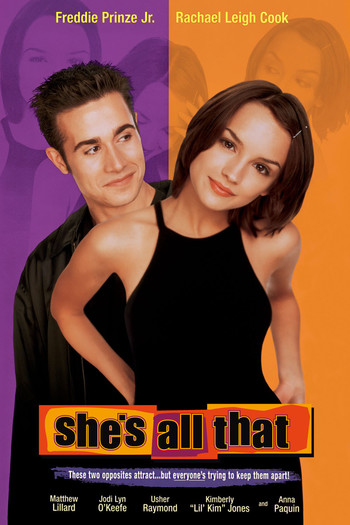 A 1999 teen romantic comedy directed by Robert Iscove, starring Freddie Prinze Jr. and Rachael Leigh Cook (in her first leading role). It's a High School modernization of George Bernard Shaw's Pygmalion, which is better known by the musical it spawned, My Fair Lady.

Zack Siler (Prinze) is the Big Man on Campus and has everything going for him: Hot girlfriend Taylor Vaughn (Jodi Lyn O'Keefe), his choice of university, school soccer star, student council president. When his girlfriend dumps him for second-hand world reject TV soap star Brock Hudson (Matthew Lillard), Zack bets his friend Dean Sampson (Paul Walker) that he can replace her and make any girl in school prom queen in just six weeks. Dean takes that bet and selects Laney Boggs (Cook), a poor but clever art student, to be the object of Zack's experiment. Zack gets to work.

Laney is at first hostile to Zack's attempts to get close to her; she's odd but likes herself just the way she is. Eventually, though, Zack worms his way into her friends circle and convinces her to undergo a makeover. Just as the two are getting close, Dean decides he wants Laney for himself. He asks Laney to prom, and when she says no, he reveals that the only reason Zack got close to her was to win a bet. Heartbroken, Laney confronts Zack and shouts the now-infamous line: "Am I a bet? Am I a fucking bet?"

Although Laney vows not to attend prom, the night of Dean shows up at her house and offers to take her. At the dance, he brags to his friends about how he's going to sleep with her. A friend of Laney's overhears and reports it to Zack, who tries to stop the proposed carnality. Meanwhile, the Prom King and Queen are being announced. Who will be the winner? Will Zack stop Dean? Will he and Laney reunite? What do you think?

Was the main source for the teen drama pastiche parody Not Another Teen Movie and inspired a Gender Flipped remake, titled He's All That, released by Netflix in 2021.

This movie provides example of: