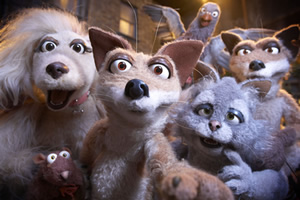 "It's a puppet show... for adults."
Advertisement:

Mongrels is a BBC Three production that started airing in 2010, which is, as it says in the ads, 'a puppet show for adults'. Indeed, the show does revolve around five puppet animals who hang out in the back of an inner city pub.

It was created by Adam Miller, who claims he wants 'to do for puppetry what American shows like The Simpsons have done for animation'. The show's first season ran for eight episodes from June through August 2010, and the second season of nine episodes began with a double bill on the 7th of November 2011. It was not renewed for a third season.

There were some controversial claims that it was plagiarizing the Channel 4 programme Pets, but those have pretty much been found to be without basis as the two shows don't really share much beyond a broadly similar concept and a few shared backroom staff.

The pitch reel can be seen here.

Part 1 of the pilot can be seen here.

Part 2 can be seen here.