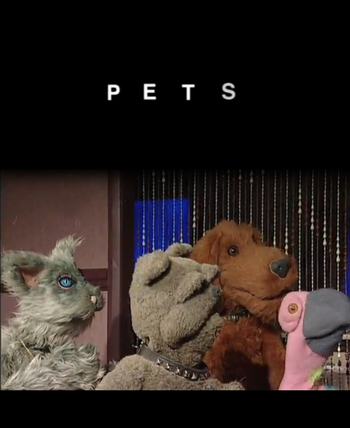 Pets was a British adult puppet sitcom created by Andrew Barclay and Brian West and originally broadcast on Channel 4 from 2001 to 2002. It was shown late at night on Channel 4, and developed a cult following of fans who asked for the show to be released on DVD on the official website. This eventually happened, and the series was for a time made available as a free podcast on iTunes. There was recently some controversy as the creators of Pets alleged that the BBC3 show Mongrels had plagiarised Pets.

The situation is similar to a flatshare comedy. The four pets, a red setter dog named Hamish, a bulldog named Trevor, a persian cat named Davina and a featherless parrot named JP, live together in a house. All the events take place within the house, but these events are often supernatural.