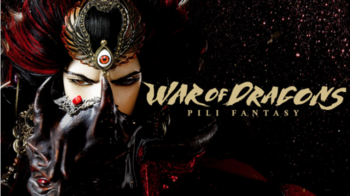 As turmoil looms in the Martial World, and the Eight Wonders of the Evil Dragon unleash their dark forces, who will emerge as the new warrior legend?

Pili Fantasy: War of Dragons is a hand puppet Wuxia show that mixes martial arts combat with social and political conflict. Featuring a large cast, the show centers on the conflicts of the characters in the "Martial World", warriors with the ability of Ki Manipulation and those who can help and hinder them in their various quests.

The main conflict revolves around five factions: the Eight Wonders of the Evil Dragon, The Eight Tiger Generals, the Emperor of the Northern Tribes, the Eternal Empress of Silkworm Palace, and the Demon King and his realm. The Eight Wonders are naturally gifted martial artists ostensibly in service of the Evil Dragon, who wishes to take over the world to do as he wishes. The Eight Generals of Heavenly Tiger are their fated opponents, who fight to protect the world. The Emperor vies to take over the world, and the Empress wants to power up her pet Silkworm so it can destroy the world.

The show is a remake of Pili's 6th season, and premiered on Netflix on July 12, 2019. This makes War of Dragons the first installment of the main Pili series to air in English speaking countries in an uncut format.