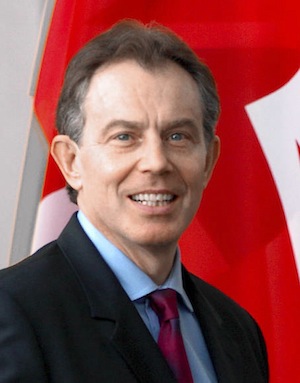 Another jackass in a hailstorm.
"He was the future, once..."
— David Cameron on Blair during their first exchange in Prime Ministerial Questions
Advertisement:

Sir Anthony Charles Lynton "Tony" Blair KG (born May 6, 1953) is a British politician who served as Prime Minister of the United Kingdom from 1997 to 2007. Perhaps unusually, Blair wasn't from the South but in fact started out in Scotland (he was born in Edinburghnote His ancestry is insanely complicated to explain, as his father was the bastard son of English actors adopted by a Glaswegian dockworker, and his mother was born in County Donegal to an Ulster-Scots family, which had in recent generations shuttled between Glasgow (which was roughly where the family had migrated from centuries ago) and Ballyshannon several times. Whew.) and was educated in the English North and Scotland. He became the Labour Party MP for Sedgefield in 1983 and party leader in 1994. In 1997, he steamrollered John Major's Conservatives and won Labour's first election victory in 18 years in a landslide, winning 418 out of 659 seats, the most seats won by one party in any election since the Second World War. He was first appointed as prime minister four days before his 44th birthday, becoming at the time the youngest PM since Lord Liverpool, who was appointed the day after his 42nd birthday in 1812.

Despite criticism (most notably for shifting the Labour Party massively to the right and for invading Iraq), he captained Labour through three consecutive victories, passing Harold Wilson for cumulative tenure of a PM from that party late in his second mandate, and left by his choice in 2007 after seeing off four opposition leaders before handing over to the Chancellor. It goes without saying the switch from Captain Charisma to No-Flash Gordon has fueled several jokes. Blair currently acts as an international development consultant and, to significantly greater consternation, a UN peace envoy to the Middle East. His premiership also saw a military intervention which ended the Sierra Leone Civil War — and, to this day, Sierra Leone is just about the only country with an unequivocally positive view of him. (Kosovo is the other, due to his staunch support for the 1999 NATO intervention.)

His enduring legacy is that he (and Mandy) reinvented the traditionally blue-collar Labour Party into "New Labour", with middle-class cubicle monkeys as his base. Purists criticized him for this, but Blair was largely a product of his time. His soothing TV manner and propensity to dodge hard issues made him more reminiscent of an American president than PM — a trend that continued with David Cameron, and made life quite difficult for Gordon Brown and Theresa May, who tried to behave more traditionally.

Not afraid of media, Blair played himself in The Simpsons and a sketch with Catherine Tate. Likely the only prime minister to have said "Am I bovvered?"

In British media he tends to get portrayed either as a lapdog of contemporary US President George W. Bush, as the Straight Man to Bush, or as an insincere spin master. He had a habit, especially towards the end of his tenure, of pausing ... at the end of every sentence as if trying to make it easier, to cut out sound bites. The apex/nadir of his talking in slogans surely came in Northern Ireland, where he said "This is not the time for soundbites, but I feel the hand of history on my shoulder." It got so pronounced that Have I Got News for You once played a minute-long speech by Tony, then played it again with "the extraneous material" removed, which is to say they played 25 seconds of silence.

Early in his premiership, Blair was noted for the election catchphrases "tough on crime, tough on the causes of crime" and "we have three priorities: education, education and education". These were widely parodied, Mad Libs-style, in the media and to some extent have entered the British lexicon. True to his word, Blair's government criminalised more than 3,000 (not a typo) acts, one for almost every day New Labour was in power; most curious was criminalising "causing a nuclear explosion", as it is remarkably tricky to do this without committing at least one other crime.

"Teflon Tony" was also noted for his controversy-proof image, with scandals affecting his government seeming not to dent his own popularity. This made it all the bigger a contrast when the Iraq War became the one issue he could never escape. In retrospect, some feel that Blair got lucky in facing a succession of terrible Conservative leaders after becoming prime minister,note The first, William Hague, struggled to put across a good public image and was really on a hiding onto nothing succeeding Major. The second, Iain Duncan Smith, is often regarded as the worst leader the Tory Party has ever had. The third, Michael Howard, didn't do too badly considering he took over from Duncan Smith's disastrous leadership only 18 months before his general election, but suffered in the public eye after Labour kept reminding the public that he had served in Major's then still-profoundly-unpopular government. The fourth, David Cameron, was a much more credible threat, but didn't really come into his own until Blair had left office. and that a more capable opposition leader would have held his feet to the fire over Iraq much more effectively. Blair's reputation has diminished still further with the Chilcot Report (which found that Blair lied to Parliament and to the British people regarding the information about Iraqi WMDs; Blair denies this), for which even subsequent Labour leader Jeremy Corbyn condemned him. The Iraq War's fallout turned Blair into a British version of US President Lyndon Johnson — a progressive leader whose domestic accomplishments were overshadowed by an unpopular war. Blair's staunch pro-Europeanismnote He wanted the UK to join the Euro but intervention by Chancellor Brown prevented it, thus sparing the UK the economic fall-out from the Euro crisis; he renounced the UK opt-out from the Social Chapter and part of the UK budget rebate in exchange for, ultimately, very little; he waived a seven-year moratorium on immigration from new EU member states; he refused to allow a referendum on the Lisbon Treaty despite promising one in the 2005 election because he knew it would not pass, although, to be fair, Brown continued this policy. is widely seen as detrimental because it encouraged the conditions that led to the "Leave" result in the 2016 referendum on continued UK membership of the European Union.note Voters could dismiss economists' warnings about the risks of leaving the EU because many of them had also warned about the dangers of staying outside the Eurozone; they could also ignore the guarantees and opt-outs that Cameron had secured for the UK in his renegotiation because there was always the chance another pro-European like Blair could come in and just give them up again; they could also ignore the extant law that would prevent further political integration without voter consent (the European Union Act 2011) because the previous government had enacted the Treaty of Lisbon without a public vote since it was touted as a "cleaning-up exercise" instead of fundamental change. Blair, for his part, strongly supported the "Remain" campaign during the referendum and spent most of his time in the public eye thereafter advocating for a reversal of the result, becoming one of the earliest prominent figures to back what eventually became the movement for a second referendum on the subject. However, once the Conservatives decisively won the 2019 general election with a program titled Get Brexit Done, Unleash Britain's Potential, ending all prospects of a second referendum, and officially achieved Britain's withdrawal on 31 January 2020, he was among the first pro-Remain politicians to urge his fellows to accept defeat and move on.

At the height of his popularity, he ended at #67 in 100 Greatest Britons. He is still living, though given both the Tories and a large chunk of Labour hate his guts, he's unlikely to be elevated to the Lords anytime soon.note His longstanding failure to be appointed a Knight of the Garter — a traditional laurel for former prime ministers ever since they stopped being granted earldoms (Harold Wilson, James Callaghan, and Margaret Thatcher received life peerages) — is widely believed to be borne of the Queen's personal distaste for him (she's still bitter about the Princess Diana affair), as membership of the Order is one of her few remaining personal prerogatives. This created a problem in that it meant she could not appoint any subsequent prime minister to the Garter, either, lest she be perceived as unduly prejudicial against him. It should be noted that Blair finally was appointed to the Garter on 31 December 2021, a full fourteen years after leaving office, and at the first opportunity after the death of the Queen's husband, Prince Philip. Shortly after retiring he actively sought to become the inaugural president of the European Council — a position created by the Treaty of Lisbon — with the active support of his successor PM Brown, but other European leaders instead chose Herman van Rompuy, a former prime minister of Belgium. There were also persistent rumours that he, on behalf of Britain, might have been "rewarded" with a high-ranking position in the European Union had Britain voted to remain in the referendum, which of course is now impossible. With Conservative PM Boris Johnson's electoral victory in 2019, he has the distinction of being the only Labour leader to win a general election in the span of a half-century, between Harold Wilson in 1974 and at least the next general election in 2024.

His name "Tony Blair, PM" is also, amazingly enough, an anagram for "I'm Tory Plan B".