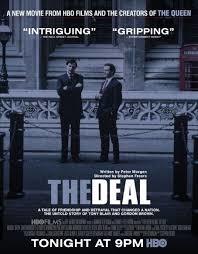 2003 TV Drama (since released commercially by HBO in 2007) about the "deal" supposedly struck between Tony Blair and Gordon Brown over the Labour leadership before Labour's landslide election victory under Blair. As far as is suggested in the film, Brown thought he had Blair's guarantee that if the two of them came into competition over the Labour leadership, Blair would back down - and when this did not happen, another deal was made where Blair would at least stand aside to allow Brown to lead the Labour government after his own first term. Blair, as it turns out, doesn't see either agreement quite the same way as Brown.

Following the success of The Queen, by the same writer/producer team (Stephen Frears and Peter Morgan) and also featuring Michael Sheen (Underworld) as Blair, now marketed as a prequel to The Queen, or as the first installment in the "Blair Trilogy", to feature The Deal, The Queen and the 2010 release The Special Relationship.

Expect large-ish amounts of mostly remarkably unpretty Ho Yay, generally unflattering angles on nearly everyone involved, and Blair showing at the very least a ruthless pragmatic look-out for his own future power above other considerations.

Has nothing to do with the 2008 film about the movie business.